Whereas an event or incident can be described as traumatic (i.e. causing trauma), trauma itself is something that is stored in our bodies and which affects our physiology.  This happens when a threat is so overwhelming and inescapable that we are unable to process it properly. The survival energy that our body has released in response to the threat gets STUCK in our body.

What is really interesting about this is that animals in the wild do not get chronic diseases as humans do. Trauma does not get stored in their bodies.  When faced 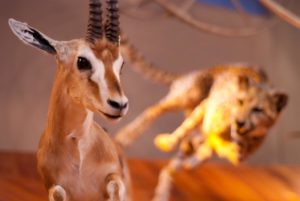 with a threat, a mammal will release adrenaline (sympathetic nervous system response). This will cause a range of physiological changes which will help the animal to fight back or to run away (‘flight’). Say, for example, a zebra was being chased by a cheetah. It may be the case that the zebra would not be successful at either fighting back or running away from the cheetah fast enough. Therefore, the zebra will instinctively freeze (play dead). The evolutionary function of this is that the cheetah may not eat the zebra immediately if it thinks it is already dead. The cheetah may get up and leave the zebra for a while, thus giving the zebra a chance to escape.

Once it is safe for the zebra to come out of its immobilised ‘freeze’ state, then the zebra will shake to discharge the survival energy that has built up in its body. Therefore the zebra does not store the trauma in its body. The following link shows a great example of this with an impala: https://www.youtube.com/watch?v=Ox7Uj2pw-80

The difference with humans, is that we have evolved another part of our brains called the neocortex / prefrontal cortex. This is our rational thinking brain. This part of the brain overrides our natural impulse to shake and discharge the energy. Therefore the energy gets stored in our bodies. Through various physiological mechanisms, such as our inflammatory response, this can cause a whole range of chronic illnesses, such as rheumatoid arthritis and fibromyalgia.  The reason that stress induces an inflammatory response is an evolutionary adaptation. If a lion was about to bite us, then we need the immune system to be primed to bring inflammation to stablise the wound.

The current Western medical system of providing medication for these conditions, simply patches over the symptoms. Therapies, such as NARM (NeuroAffective Relational Model), Somatic Experiencing and Somatic Practice, are steadily growing in popularity and provide a way of dealing with the cause of these conditions by processing the energy that has become stuck in the body.